5 key medical breakthroughs of the 2010s 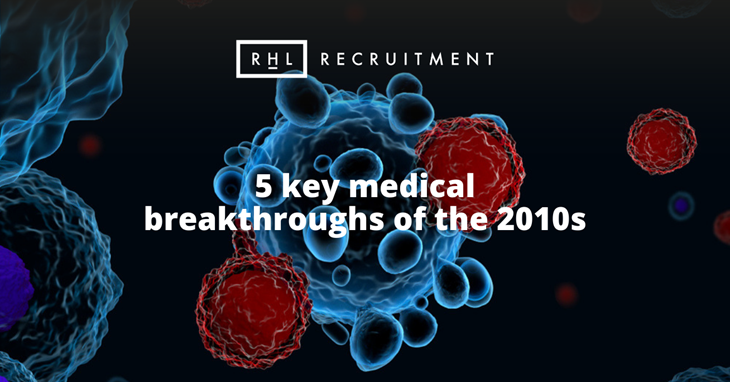 There have been massive gains in scientific research and technological innovation, particularly in the field of cell and gene therapy (as we discussed recently here) and pharmaceutical and surgical advances.

Here’s a brief guide to some of the greatest advancements of the last decade that have the potential to transform lives for years to come.

Once there were just three ways to treat cancer: surgery, radiotherapy or chemotherapy (or a combination of all three). Now immunotherapy (or immuno-oncology) is bringing new hopes for cancer patients globally.

The last decade has been rich in major discoveries, including for pancreatic cancer, lung cancer, advanced breast cancer, aggressive non-Hodgkins lymphoma and advanced and metastatic melanoma.

Scientists have developed 3D printing to such a level that it can now create human body parts and surgical implants.

The first breakthrough to hit the headlines was the creation of a realistic and functioning outer ear in 2013, and in time it’s hoped that patients’ stem cells will be used to mass print tissues like human livers, kidneys and skin for treating burns.

Known as the powerhouses of the cell, mitochondria are present in nearly every cell in the human body. About 1 in 4,000 people in the world have mitochondrial diseases, for which there are no treatments.

But now mitochondrial transfer therapy has been developed to replace abnormal mitochondria in an embryo with healthy mitochondria from a donor. The first baby was born with this technique in Mexico in 2016, giving hope for parents with a high risk of passing on fatal genetic diseases to their children.

With DNA from three parents, it’s a controversial procedure - although the UK legalised it in 2015.

A stem cell transplantation breakthrough has brought renewed hope that a cure for HIV can be found.

In 2019, a British patient became the second person to potentially be cured of HIV after receiving stem cells from a donor with genetic resistance to the disease. He’s now described by doctors as being in ‘sustained remission’.

This has happened once before, over a decade ago in Berlin. Both patients had bone marrow stem cell transplants to treat cancer - the stem cells came from a donor with a rare genetic mutation of the CCR5 gene, which made them HIV-resistant.

Although stem cell transplantation isn’t suitable as a cure as it carries risks in itself, scientists hope that this development could lead to breakthroughs in gene technology or antibody techniques.

Millions of type 1 diabetics have to check their blood glucose levels throughout the day and deliver insulin with syringes or insulin pumps.

But a new device, known as an artificial pancreas, can now automatically measure blood glucose with a sensor using a protruding needle then deliver the right dose of insulin according to the readings. It will also alert users if they’re at risk of dangerously high - or low - glucose levels.

The pace of change in the medical science world has been fast over the last 10 years, and things are set to move even more rapidly in the next decade. For anyone working in life sciences - whether you have a technical, operational or clinical background - there’s true potential to change healthcare - and the world - forever.

If you’re interested in a career in life sciences, get in touch to find out about the exciting projects we’re recruiting for right now at RHL Recruitment.