How has being black affected my career? 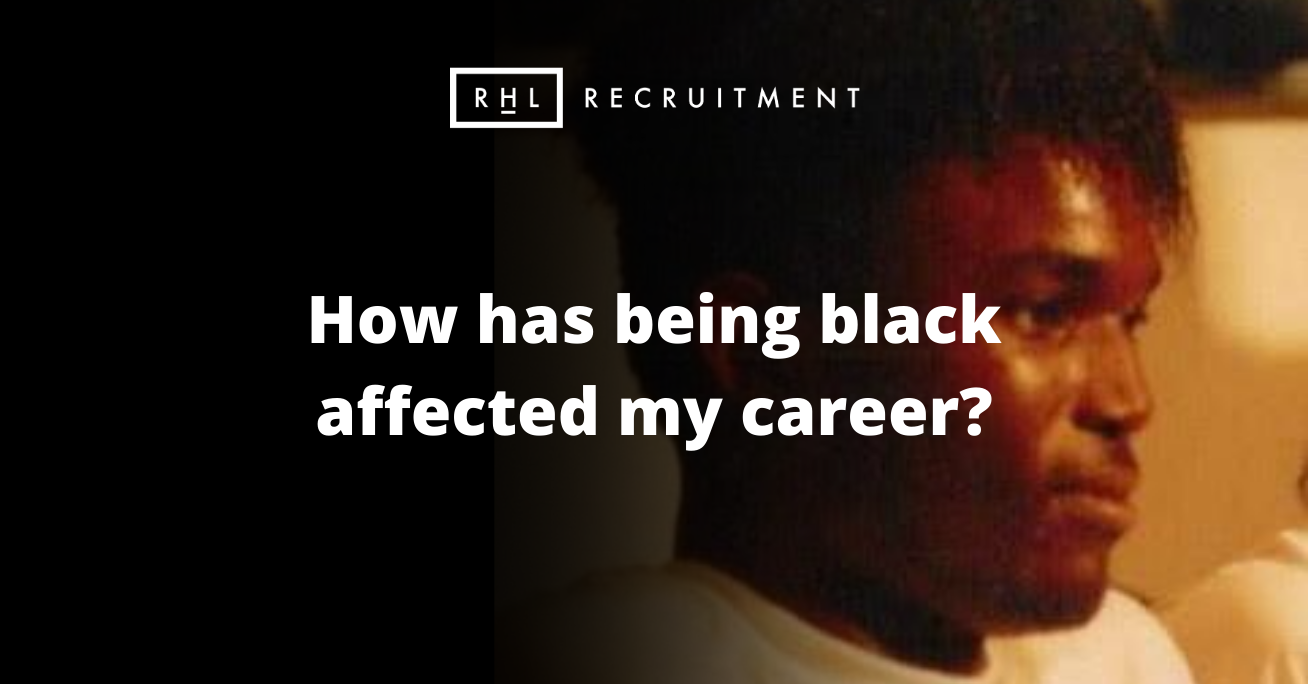 With the worldwide focus currently on Black Lives Matter, I wanted to write my story as a black male growing up and working in the UK. Make no mistake there has been, and continues to be, racism in the UK and across the world, but my belief is that a positive view and almost adopting an ignorance towards racist behaviour can have an effect on how we as a black race are perceived. I will explain this statement more later!

I have discussions all the time with my friends on the Black Lives Matter movement and it is interesting to me the different experiences that black men and women have growing up in the UK.

My friends and family have their own stories to tell, but their experiences growing up in the UK varied widely. For instance, being unable to go to certain places without feeling or having direct conflict with white individuals, sometimes just not bothering to go to certain events due to previous experience in a similar situation and seeing this very negatively.

The biggest influence on my life has come from my mum, she is a strong, proud and fiercely independent black woman who taught me one thing above all “shine bright son, don’t let anyone or anything stand in your way”. Her struggles as part of the Windrush generation I would love to tell, but that would be a book or two!

This leads me to my own life and what I have seen and been subjected to. A typical example is when I was working as a National Consultant for an insurance company. I happened to be in Glasgow for a conference with some financial advisers and we decided to go out for dinner. After walking a short while we came across a restaurant/venue that looked nice.

The security at the door told me “we are not open today”, which was odd as the lights were all on. We stood outside to decide where to go when a white couple came up and security let them in immediately. I was incensed and questioned the security only to be told “we are not open for the likes of you. Your friends [who were white] are welcome but not you, so move away from the door”

I simply did what I was told and shook it off. The company I was with were all embarrassed either for me or their race. I laughed and lightened the mood. I was however shocked and disappointed that in modern times racial abuse could still be so blatant.

Was I wrong to just accept this? Should I have created a bigger issue by arguing it was racism? Many would say yes, but I too was embarrassed. Not for him or my colleagues, but for myself. I was embarrassed that I could be viewed that way and really did not know what to do.

I decided my approach would be to always aim to portray a positive attitude, and this has helped me enormously throughout my life and career. Many would say that I have just been lucky, but I believe in making your own luck whether Black, White or otherwise.

Born in the UK in the early 70’s, I spent my early life from age 4 to 14 living in Barbados. This part of my life I will leave to another time, but upon returning to the UK I was sent to school in South London. This was a really interesting time for me as I came here with a Bajan accent (as we all spoke in Barbados) and my first memory was of the children at school asking me to speak constantly to hear my strange but fascinating accent. I was not altogether comfortable with this attention and spent weeks upon weeks in front of the mirror teaching myself to lose the Bajan accent and to speak more like my classmates.

Nevertheless, my early years back in the UK were fantastic as I made friends easily. The school was populated by all races, Black, White and Asian, and my friends were very diverse.

During my early career I was determined to make the most of my life here. I saw the UK as a country that had enormous opportunities for the right people, and I wanted to ensure that I was the right person. So, I was determined to make sure that it was my personality, achievements at school and, latterly, achievements at work that shone through, rather than displaying a pessimistic view of the UK.

My career has been varied from Insurance to sales and latterly recruitment and I also worked as a dancer in my teens and twenties with 2 of my closest friends. We are all black but were accepted to work in clubs across the UK. Not mentioning any names, but we worked for national radio, produced a music video, and won competitions across Europe. Yes, we did get racial abuse at some locations in the UK, but again we maintained a positive view and because of this we were accepted for what we were: excellent dancers!!

Over the next few years, I moved from sales to financial services and relocated to the South Coast from London. Here at that time I was very much in the minority but refused to let any negative views or actions deter me from my goals. Each time I changed jobs or moved to a new area, I traded on my positive qualities and refused to acknowledge any hints of racism.

I started in recruitment at the turn of the century and I would say that many people have influenced me and given me the chance to shine. In the past 20 years I have moved on from a trainee consultant to Regional Director for a large national recruiter. I then decided I wanted to work for myself and this led me to Jack Parkinson and Roddy Barrow at HR GO plc where, after several meetings, we agreed to start a joint venture in RHL FM and Technical in December 2019.

Having told you all of this I have to stress one very important fact - none of the manager/directors/owners of the businesses I have worked for in a capacity as an employee, consultant, partner or director were from a Black or ethnic background. Maybe I have been lucky, but I believe that I am viewed as me - a personable and experienced individual who looks at life, including my business life, from a positive point of view.

Don’t get me wrong, as I have said, racism exists. I have experienced negative views, I have had doors slammed in my face, I have heard the comments “I did not expect you to be black”, “You must find it difficult being black and leading white people”, “You must have to work hard to gain the respect of others”, “All black people seem to have a chip on their shoulders”, and worse that I care not to mention.

I am in favour of the Black Lives Matter movement. It is sad that some individuals don’t see people from an ethnic background for what they are, intelligent, hardworking people who have a lot to offer employers in their field of experience or expertise.

My approach is not to take everything said personally and to believe in myself and my ability. I would implore all who read this, not just ethnic minority people but all people, to look at your abilities and experience and to push these to the fore. Don’t let negative views or actions deter you from your goals. There are individuals out there who will give you opportunities to shine and bring your abilities forward, but first you must have the right attitude and portray this positively.

 Hertfordshire - Stevenage
up to £45000 per annum, OTE, progression,

Coronavirus: How to protect your mental health

Avoid these unforced errors before hitting that apply button

How not to be your own saboteur when applying for jobs

How to brighten up your team's Blue Monday

Help boost staff morale on the bleakest day in 2021

Show applicants they're not just a number