Is HS2 finally back on track? 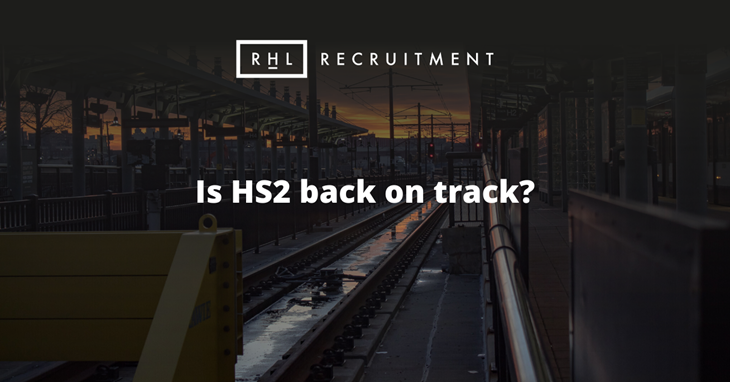 Is the HS2 rail project about to hit the buffers? Until recently, the future of a new high-speed rail line linking major cities across England looked to be in jeopardy.

Although the preparatory work for the first phase between London and Birmingham is already underway and providing work for thousands of people, the government had given off mixed signals about the ambitious scheme’s future.

They’d been waiting until the findings of a review into its viability and cost-effectiveness, the yet-to-be-published Oakervee review, before confirming a way forward.

Industry experts have put forward strong arguments when it comes to economic growth, jobs and productivity benefits. Figures from early autumn 2019 show that HS2 is crucial for the construction industry alone – an estimated 2,000 companies have already been involved in the project and 9,000 people are currently working on it directly or indirectly.

And at RHL, where we find technical and advisory professional talent for clients delivering essential infrastructure projects like HS2, we’ve been waiting to see some clarity around the plans.

Now it looks like there might be some certainty at last, with the government planning to legislate to take the HS2 rail line north past Birmingham.

The introduction of the rail reform and High Speed Rail 2 (West Midlands - Crewe) Bill was included in plans as the Queen officially opened Parliament in December 2019. And it would give the government the powers to buy the necessary land by compulsory purchase, construct it and operate the line.

Although so far there’s been no mention of the link up between Birmingham and Leeds (phase 2b of the project), it’s obvious that new rail infrastructure is needed in northern England.

Some industry experts had wondered if one alternative could be what’s known as the ‘Northern Powerhouse Rail’ project  - a new high-speed rail line to link cities in Yorkshire into HS2 across the Pennines to Manchester.

Journey times from Manchester to Leeds would be cut to just 20 minutes (currently it takes over an hour).

Another idea would be to put the money earmarked for HS2 into multiple separate local infrastructure schemes instead.

Do the negatives outweigh the positives?

So far, the scheme has hit the headlines for all the wrong reasons.

There have been strong objections from environmental and ecological protestors and tough questions to answer about the negative impact along the route.

It’s already billions of pounds over budget, with the latest final cost estimates hitting the £100bn mark, and years behind its original schedule.

But the sheer scale of HS2 means that there was always going to be plenty of ongoing debate. And many business leaders say that the scheme is vital to the development of the UK economy.

At RHL, where we work with many of the suppliers, advisors and partners involved in building these complex schemes, we know that demand for stellar talent is at an all-time high. We’re looking forward to playing our part to get this project back on track - and the nation moving again.

 Hertfordshire - Stevenage
up to £45000 per annum, OTE, progression,

How to navigate through a career plateau

Avoid these unforced errors before hitting that apply button

How not to be your own saboteur when applying for jobs

How to brighten up your team's Blue Monday

Help boost staff morale on the bleakest day in 2021

Show applicants they're not just a number